Phase 1: The Production and Perception of Rhetorical Questions in German

Phase 2: Towards a Prosodic Grammar for Rhetorical Questions

In the first phase of the project, we systematically studied the prosodic realization of RQs, as compared to ISQs. Prosody is an important marker that has as yet hardly been investigated so far. In several production experiments in different languages (German, English, Icelandic), we compared the prosodic realization of string-identical interrogatives (wh-questions and polar questions with similar propositions in the question radical) that were disambiguated by context type (RQ vs. ISQ reading), see Table 1 for examples. In perception experiments, we also investigated the cues that listeners use when interpreting an interrogative as an RQs. Note that a brief overview on the major results from the first phase are presented below. In sum, results from the first phase contribute to our understanding of the interface between prosody and meaning in both production and perception. Furthermore, they allow a fine-grained specification of the contribution of several situational and linguistic factors concerning the interpretation of interrogative phrases.

In the second phase of the project, the main objective is to work towards a prosodic grammar for rhetorical questions by using the results from phase 1 (see details below) and extending our investigations. By establishing a prosodic grammar we mean: (a) test the existence of a new accent type category and possibly add it to the tonal inventory of at least German (based on phase 1, see below), (b) determine the well-formed combinations of the phonological (pitch accents, boundary tones) and phonetic cues (duration, voice quality, pitch range) identified in the first phase, and (c) work out which of the cues and which specifications are language-specific, and which are part of the grammar of more than one language. To this end, we continue our research on German and Icelandic from the first phase, and we add two additional languages that pose different constraints on the prosodic cues found for the marking of rhetorical questions in the first phase, (two varieties of) Italian (durational constraints) and Mandarin Chinese (tonal constraints).

In a production experiment with German speakers, we investigated the distribution of accentual patterns, boundary tones, duration, f0 excursion, and voice quality in ISQs and RQs. Major results show that, compared ISQs, RQs have longer constituent durations (see Figure 1 for duration in wh-questions), a breathy voice quality in the beginning of the utterance and a different nuclear tune than ISQs. RQs were mostly realized with an L*+H nuclear accent, which is phonetically special in our data since both tonal targets (L and H) are aligned within the accented syllable, henceforth (L+H)* (Braun et al. 2019), see Figure 2. 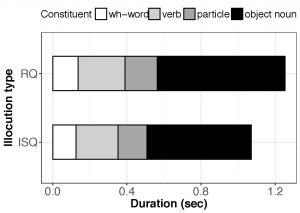 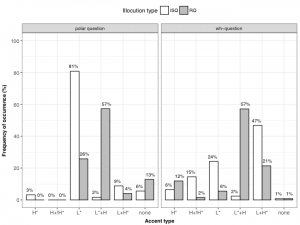 Polar RQs ended in a high plateau (H-%) while polar ISQs showed a continuous rise (H-^H%). To validate the results on more naturalistic data, we conducted a corpus analysis (open subtitle corpus; Tiedemann 2009) that contains subtitles from movies and searched for RQs. We found that the prosodic cues that were most frequent in RQs in the production experiments are also found in movies, e.g., the (L+H)* pitch accent and breathy voice quality (Braun et al. to appear). Extending the research to other sentence types, we compared rhetorical verb-first questions to string-identical verb-first exclamatives in German. Verb-first exclamatives, similarly to RQs, show a large number of the (L+H)* pitch accent type, as well as longer constituent durations in comparison to verb-first ISQs (Wochner & Dehé 2018).

From a cross-linguistic perspective, similar prosodic differences between illocution type (ISQs vs. RQs) were found for English and Icelandic, see Dehé (2017) for a cross-linguistic comparison of RQs vs. ISQs in German, English and Icelandic. Specifically, Icelandic polar RQs have more early and upstepped nuclear accents than ISQs. Wh-RQs had more upstepped and bitonal nuclear accents than ISQs. Also, similar to German, Icelandic shows longer durations for RQs compared to ISQs (Dehé & Braun 2020). In (Western Canadian) English, wh-RQs differ from ISQs in terms of nuclear and prenuclear pitch accent types. Similarly to German, polar RQs were distinguished from ISQs by the edge tone. Generally, RQs showed longer durations and in wh-questions also a softer voice quality at the beginning of the utterance (Dehé & Braun 2019).

Based on the production data in German, we also trained classification and regression models for polar and wh-questions, using all possible phonological and phonetic variables as features (Braun et al. 2018). For automatic classification, none of the acoustic or perceptual voice quality measures remained in the final classification setting. For polar questions, there was only one split that distinguished ISQs from RQs, which was the final edge tone: Interrogatives with an H-% were classified as RQs, while other edge tones resulted in a classification of an ISQ. Wh-questions were primarily distinguished by accent type, which caused the initial split, see Figure 3. For both question types the accuracy was > 85% on an unseen data set (20% of the data). Furthermore, we have recently started to fit random forest models that allow to determine the strongest predictors (prosodic parameters) for the automatic classification of illocution type. For both question-types, nuclear accent, final edge tone and speech rate were the strongest predictors for illocution type, albeit in different orders for the two question types.

Figure 3. Result of a pruned classification and regression tree for wh-questions. The values below the classified labels indicate the probability of the fitted class.

To test the perceptual relevance of the prosodic cues identified in the production experiments, their weighting, and their temporal integration, perception experiments were conducted. In visual-world eye-tracking experiments with two labels printed on screen (real question vs. rhetorical question), pitch accent types and voice quality were manipulated (duration was held constant) and fixations of listeners were collected, see Neitsch, Braun, and Dehé (2018) and Kusterer (2016) for the analysis of fixations in wh-questions with and without the German particle denn. Overall the results showed that the (L+H)* triggered an RQ interpretation but only if voice quality was breathy, while H+!H* triggered an ISQ interpretation, irrespective of the voice quality setting. The wh-questions without the particle denn resulted in a similar response patterns. As fixations as a function of illocution type diverged only after the end of the utterance, we switched to a button box experiment in which German participants indicated whether the interrogative they heard is an RQ, ISQ, or neither (Xu, 2018). In this experiment, pitch accent type ((L+H)* vs. H+!H*), voice quality (breathy vs. modal), and duration (long vs. short) were manipulated. The results for RQ-responses are depicted in Figure 4 (left panel: (L+H)* accent, right panel: H+!H* accent).

They showed additive effects of all three factors: RQ clicks were most frequent in interrogatives with an (L+H)* accent, breathy voice and long duration, and became less frequent when any of the factors changed. The factor pitch accent type had the strongest influence. The effects of voice quality and duration were similar to one another, but smaller than the effect of accent type. In sum, in perception, listener can interpret interrogatives as rhetorical or information-seeking; they make use of the intonation contour and voice quality, as well as of durational values.